Boonah is both a town and a locality of the Scenic Rim Region in south-eastern Queensland, Australia. At the 2011 census, the town had a population of 2,474. 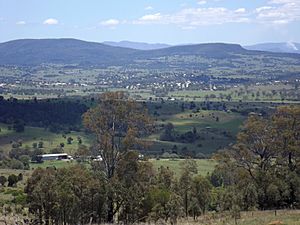 Mount French, Dugandan and the town of Boonah, 2016

The town is positioned near the Fassifern Valley, McPherson Range and Main Range. It is surrounded by hills, including Mount French and other Moogerah Peaks. Frog Buttress is a popular rock climbing cliff on the north-west side of Mount French. 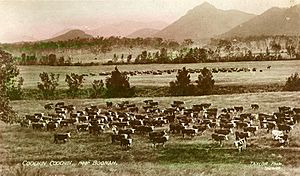 Postcard of Hereford cattle on Coochin Coochin Station, near Boonah, 1909. In the background Mount Barney and the McPherson Range of the Scenic Rim can be seen. 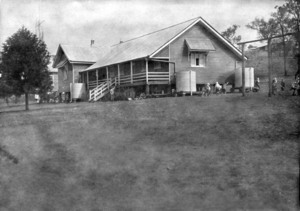 The history of Boonah township is connected to the nearby settlement of Dugandan which was named after a pastoral run of the same name that was taken up in August 1844 by Macquarie McDonald and his brother Campbell Livingstone McDonald. Dugandan was one of the earliest pastoral holdings in Queensland. In its early years the area was stocked with sheep but the region was discovered to be well suited for cattle and over time became renowned for the quality of its beef and dairy herds. Adjacent to the property of Dugandan was Coochin Coochin station. In 1873, part of the Coochin Coochin pastoral run was acquired by Frederick Macarthur Bowman who named his property Denelgin. Frederick Bowman took advantage of the suitability of the area for cattle and is considered one of the dairying pioneers of the region.

Variously known as Dugandan Scrub and Blumbergville, Boonah was also positioned within the boundaries of the early Dugandan property. Following the introduction of the Crown Lands Alienation Act of 1868 and the subdivision of the large pastoral runs, the settlement fell within the boundaries of a new 320 acre property acquired by John Hooper in 1878.

Due to the scattered distribution of European settlers, the close proximity of the two settlements that would eventually become the townships of Dugandan and Boonah and the lack of a clear geographical centre, during the 1870s - 1880s the names Dugandan, Blumbergville and Boonah were used interchangeably. As late as 1888, the courts of petty sessions were described as occurring at "Boonah, otherwise known as Blumbergville".

The Dugandan Provisional School opened on 15 July 1878 between Dugandan Scrub and Dugandan Flats next to the Teviot Brook on land which would eventually fall within the boundaries of the Blumbergville/Boonah township. The school was the first building in the township and by 1880, 40 families were living in the Dugandan Scrub area and Blumbergville was starting to be established.

Blumbergville took its name from a store owned by three brothers, Max, Levi and Adolf Blumberg, located on the later site of the Commercial Hotel in High Street, Boonah. Around 1884, the Blumbergville Post Office was opened and on 30 May 1887 the Dugandan Provisional School was upgraded to State School status.

In 1887, the railway line from Ipswich was extended to the area, with the name Boonah given to a rail siding at Blumbergville located one stop before the terminus at the settlement of nearby Dugandan. The railway siding took its name from an Aboriginal word from the Yuggera and Yugumbir language groups meaning bloodwood tree (Eucalyptus Corymbosa) or Brigalow tree (Acacia harpadhylla).

Following devastating floods in 1887, the main commercial interests for the district relocated from the lower lying Dugandan, near the railway terminus, to the higher ground of Boonah. The Post Office was renamed Boonah around 1888 and in 1895 the school changed its name from Dugandan to Boonah State School. 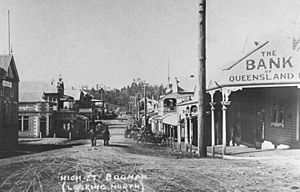 By the end of 1900, the Fassifern Butter Factory owned by Mr. S. Dover was operating in Church Street. On 5 July 1916 a larger factory, known as the Boonah Butter Factory, was officially opened on a new site on the northern entry to the town.

Initially only a primary school, Boonah State School had a secondary class added in February 1955, which it retained until 25 January 1965 when Boonah State High School opened. Boonah was the centre of the Shire of Boonah local government area until council amalgamations occurred in 2008. 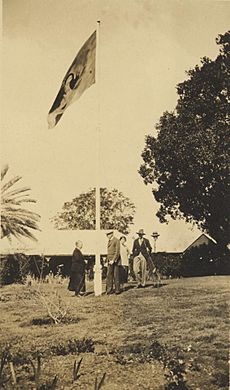 The Bell family of Coochin Coochin at the property, circa 1920 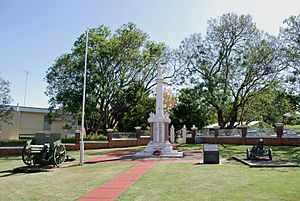 Boonah has a number of heritage-listed sites, including:

The Wyaralong Dam was constructed east of Boonah on Teviot Brook, a tributary of the Logan River. At full supply level, water would have inundated parts of the road connecting Boonah and Beaudesert, so a new section of road has been built. Water for the town is supplied from Lake Moogerah on Reynold's Creek, a tributary of the Bremer River. Maroon Dam is another reservoir built 25 kilometres (16 mi) south of Boonah at the base of the McPherson Range.

The area produces vegetables for the nearby Brisbane Markets notably carrots, potatoes, and cereal crops. Beef, pork and timber are also produced locally. In the 2000/01 financial year the Shire of Boonah produced $67 million worth of agricultural products. More than 135,000 hectares of farmland were used to produce about $20 million worth of crops and $46 million from livestock. Vegetables accounted for more than 20% of agricultural products in the area. The main crops were carrots, French and runner beans, lucerne and potatoes. The shire produced 7% of the state's hay and 8% of the state's soybeans. Dairy cows, meat cattle, meat chicken and pigs were the main livestock commodities, producing 1% of the total value of the state's production in these commodities. Nearly two-thirds of the recorded food and fibre businesses in the Boonah area produced beef cattle. More than 180 farms used irrigation. The town has a local office of Primary Industries and Fisheries.

All content from Kiddle encyclopedia articles (including the article images and facts) can be freely used under Attribution-ShareAlike license, unless stated otherwise. Cite this article:
Boonah, Queensland Facts for Kids. Kiddle Encyclopedia.