Boonah War Memorial and Memorial Park is a heritage-listed memorial at Park Street, Boonah, Scenic Rim Region, Queensland, Australia. It was built from 1920 to 1922. It was added to the Queensland Heritage Register on 21 October 1992.

The Boonah War Memorial is a major regional war memorial and was unveiled on 31 July 1920 as part of the visit to Boonah by the Prince of Wales (later King Edward VIII) who was visiting with Mrs G A Bell of nearby Coochin Coochin Station (whose three sons served in the First World War). The marble and granite memorial was designed and executed by F Williams and Company and honours the 374 local men who served during the First World War, including the 69 dead.

The town of Boonah was established as support for the pastoral runs in the area, of which Coochin Coochin was the first. Prior to the establishment of the town, all stores were brought by bullock dray from Ipswich twice yearly. After the extension of the railway to Dugandan in 1887, the surrounding district was rapidly populated and the town of Boonah prospered.

On 19 May 1920, the foundation stone for the memorial was laid by General Sir William Birdwood. The monument was erected at a cost of £600 which was raised by public subscriptions organised by a memorial committee. The specifically designed memorial park was opened on Anzac Day in 1922 with the unveiling of the fence by war hero and politician Captain Arnold Wienholt.

The Boonah memorial was designed and executed by well known and highly regarded Ipswich masonry firm, F Williams and Company.

The digger statue on the Boonah Memorial is represented in the casual stance synonymous with Williams diggers. 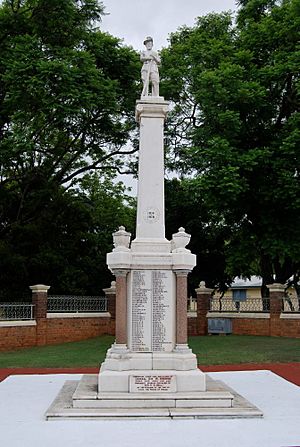 The First World War Memorial is situated in a Memorial Park in Boonah, addressing the intersection of Park and Yeates Streets. The park is enclosed by a substantial brick and wrought iron fence with concrete dressings painted white. Wrought iron gates are located at the front and rear corners and are flanked by white painted pillars with ball finials. All wrought iron has been painted silver. The park is laid out formally on a diagonal axis running from the intersection of Park and Yeates Streets to the opposite corner. A central red painted concrete path with white painted concrete kerbing leads to the memorial which is surrounded by symmetrical tiered garden beds, also kerbed. The memorial is flanked by two war trophies and a flagstaff is located on the south western side. The larger trophy, a German FK96 n.A. field gun, was bought by the townspeople in 1921 after they had rejected the Queensland War Trophy Committee's earlier offer of two captured German machine guns. Significantly, Boonah thereby became the only Australian town (or city) ever to have purchased its own Great War trophy gun (albeit, the only privately-owned Great War trophy gun ever to reach these shores).

The memorial is mainly of coarse Ulam marble and comprises a pedestal surmounted by an obelisk and a digger statue.

It sits on a marble base comprising two shallow steps and a third, deeper one, all smooth-faced. The foundation stone is located on the front face of the top step.

Surmounting the base is the pedestal. It sits on a marble step which has square projections at each corner. These each form a base for free-standing columns of red polished granite with marble Doric Order capitals and bases. The columns support a large cornice which is surmounted by four marble corner urns. In the centre of the columns are recessed marble plates, the leaded names of the 374 local men who served in the First World War. The names of the 69 dead are located on the north east face and the rear face is reserved for the names of nurses and chaplains.

Projecting from the centre of the pedestal is the marble obelisk, approximately 20 feet (6.1 m) high and slightly tapered. It has stop chamfers to each corner and stands on a marble base with cyma recta mouldings. It is capped by a marble Ionic order capital and has a wreath carved around the leaded dates of the war on the lower section of the front face.

Surmounting the obelisk is the digger statue, which is slightly smaller than life-sized. The soldier is standing at ease with his head bowed and his hands resting on his reversed rifle, which rests by his right foot and is held by his body. A tree stump is located behind the left leg for support.

Boonah War Memorial and Memorial Park was listed on the Queensland Heritage Register on 21 October 1992 having satisfied the following criteria.

Erected in 1920, the major regional memorial at Boonah demonstrates the principal characteristics of a commemorative structure erected as an enduring record of a major historical event. This is achieved through the use of appropriate materials and design elements. As a digger statue it is representative of the most popular form of memorial in Queensland.

The memorial in its setting is of aesthetic significance both for its high level of workmanship, design and materials and as a dominant landmark within the townscape. It is an uncommon example of a war memorial that survives as part of a specifically designed and intact memorial setting.

All content from Kiddle encyclopedia articles (including the article images and facts) can be freely used under Attribution-ShareAlike license, unless stated otherwise. Cite this article:
Boonah War Memorial Facts for Kids. Kiddle Encyclopedia.