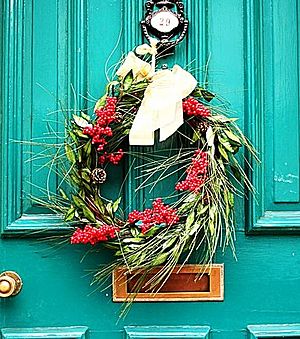 A Christmas wreath on a house door in England. 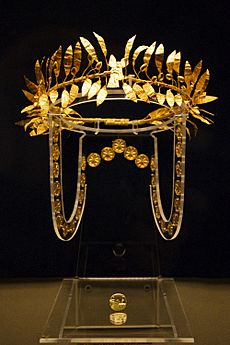 A golden wreath and ring from the burial of an Odrysian Aristocrat at the Golyamata Mogila in the Yambol region of Bulgaria. Mid 4th century BC.

A wreath is an assortment of flowers, leaves, fruits, twigs, or various materials that is constructed to form a ring.

In English-speaking countries, wreaths are used typically as household ornaments, most commonly as an Advent and Christmas decoration. They are also used in ceremonial events in many cultures around the globe. They can be worn as a chaplet around the head, or as a garland around the neck. Wreaths have much history and symbolism associated with them.

All content from Kiddle encyclopedia articles (including the article images and facts) can be freely used under Attribution-ShareAlike license, unless stated otherwise. Cite this article:
Wreath Facts for Kids. Kiddle Encyclopedia.