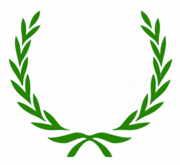 Design based on a laurel wreath

A laurel wreath is a circular wreath made of interlocking branches and leaves of the bay laurel (Laurus nobilis). This is an evergreen whose leaves give off a pleasant scent.

The wreath is traditionally worn on the head. In Greek mythology, the god Apollo is shown wearing a laurel wreath because of the story of Apollo and Daphne. In Ancient Greece, it was given to special people, such as winners in competitions in poetry or sports, such as the Ancient Olympic Games.

It was also used in Ancient Rome, and Roman Emperors are often shown wearing laurel wreaths. In the Summer Olympics 2004 in Athens, Greece gave laurel wreaths to the winners. The saying "resting on one's laurels" comes from this and means that someone relaxes now because he or she did something good in the past.

In some countries the laurel wreath is used as a symbol of the master's degree. The wreath is given to young masters in the graduation ceremony of the university. The word "Laureate" in 'poet laureate' refers to the laurel wreath.

In modern times, wreaths are used for their decorative quality rather than ceremonial use. Wreaths may be made with flowers such as roses to make them more appealing.

All content from Kiddle encyclopedia articles (including the article images and facts) can be freely used under Attribution-ShareAlike license, unless stated otherwise. Cite this article:
Laurel wreath Facts for Kids. Kiddle Encyclopedia.