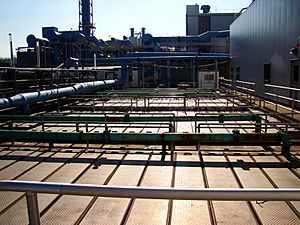 Odor control covers at a sewage treatment plant: Under these covers, grit and gravel are settled out of the wastewater.

An odor or odour is a volatilized chemical compound, usually at a very low concentration, which humans and other animals perceive by the sense of olfaction.

Odor is a sensation caused by molecules dissolved in air. The widest range of odors are made up of organic compounds although some inorganic substances, such as hydrogen sulfide and ammonia, are also odorants. The perception of an odor effect is a two step process. First, there is the physiological part; the sense of the stimulus by receptors in the nose. After that the psychological part follows. The stimuli are processed by the region of the human brain which is responsible for smelling.

Because of this, an objective and analytical measure of odor is impossible. While odor feelings are very personal perceptions, individual reactions are related to gender, age, state of health and private affectations. Common odors that people are used to, such as their own body odor, are less noticeable to individuals than external or uncommon odors.

For most people, the process of smelling gives little information concerning the ingredients of a substance. It only offers information related to the emotional impact. However, experienced people, such as flavorists and perfumers can pick out individual chemicals in complex mixes through smell alone.

The concentrations of odorant in Germany are defined by the “Olfaktometrie” since the 1870s. In this connection it’s about the standard method to define the sense barrier of odors on basis the thinner of concentrated odor loaded assays. Following parameters are defined: odor substance concentration, intensity of odor and hedonism assessment.

Pheromones are odors that are deliberately used for communication. A female moth may release a pheromone that can entice a male moth that is several kilometers away. Honeybee queens constantly release pheromones that regulate the activity of the hive. Workers can release such smells to call other bees into an appropriate cavity when a swarm moves in or to "sound" an alarm when the hive is threatened.

In mammals, some pathway of pheromones identification are in the vomeronasal organ and some in odor receptors.

All content from Kiddle encyclopedia articles (including the article images and facts) can be freely used under Attribution-ShareAlike license, unless stated otherwise. Cite this article:
Odor Facts for Kids. Kiddle Encyclopedia.