The Jacobson's organ, is part of the body that helps an animal smell things. It is found in many animals. It was discovered by Frederik Ruysch and later by Ludwig Jacobson in 1813. It is also called the vomeronasal organ or VNO. This body part is mainly used to detect pheromones, chemicals that carry information between individuals of the same species.

Its presence and functionality in humans was controversial, though most studies agree the organ regresses during fetal development. Many genes essential for VNO function in animals are non-functional in humans. Chemical communication does appear to occur among humans, but this does not necessarily imply that the human vomeronasal organ is functional.

The functional vomeronasal system is found in many animals, including all snakes and lizards, plus many mammals, such as mice, rats, elephants, cattle, dogs, cats, goats, pigs, giraffes and bears. 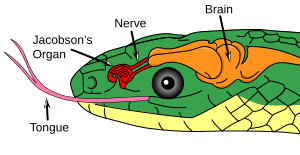 Jacobson's organ in a reptile

Some mammals, particularly felids (cats) and ungulates (which includes horses, cattle, and pigs among other species), use a distinctive facial movement called the Flehmen response to direct inhaled compounds to this organ. The animal will lift its head after finding the odorant, wrinkle its nose while lifting its lips, and cease to breathe momentarily.

Behavioral studies show the importance of the vomeronasal system in animals’ social networks and everyday activities. It is important in the role of reproduction and social networking has been shown in many studies.

All content from Kiddle encyclopedia articles (including the article images and facts) can be freely used under Attribution-ShareAlike license, unless stated otherwise. Cite this article:
Jacobson's organ Facts for Kids. Kiddle Encyclopedia.