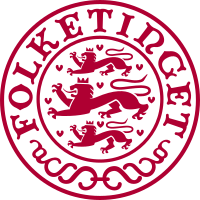 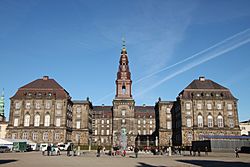 Christiansborg Palace in Copenhagen, where members of the Folketing meet.

The Folketing (Danish: Folketinget) is the national parliament of Denmark. The name means "People's thing" (a thing in this case is a governing assembly). It is the highest legislative body in the Kingdom of Denmark and decides most of the laws for Denmark, Greenland and the Faroe Islands. The Folketing meets in Christiansborg Palace, in the Danish capital, Copenhagen. 179 members sit in the Folketing (175 from Denmark, 2 from Greenland and 2 from the Faroe Islands) and are democratically elected.

Greenland and the Faroe Islands also have their own, less powerful, parliaments and are allowed to make some laws on their own.

The Folketing is where many political parties in Denmark meet to discuss important issues affecting Danish people, and to pass laws they agree on. The Folketing is also where the Government of Denmark is formed, when several parties who are in agreement decide to join together and form a coalition government (the parties forming a government must have over half of the total members of the Folketing; a majority). The voting system used in Denmark is proportional, meaning the distribution of seats reflects the distribution of votes. This means that many parties and different political views are represented, including some extreme views.

The leader of the Folketing is the Speaker who sits at the front. The members sit in front of the speaker in the shape of a semicircle.

The most recent general election took place on 15 September 2011.

The centre-right coalition that was in power before the election, led by the Liberal Party, lost to a centre-left coalition led by the Social Democrats. The Social Liberal Party and the Socialist People's Party became part of the three-party government, which holds 89 seats in the Folketing.

All content from Kiddle encyclopedia articles (including the article images and facts) can be freely used under Attribution-ShareAlike license, unless stated otherwise. Cite this article:
Folketing Facts for Kids. Kiddle Encyclopedia.