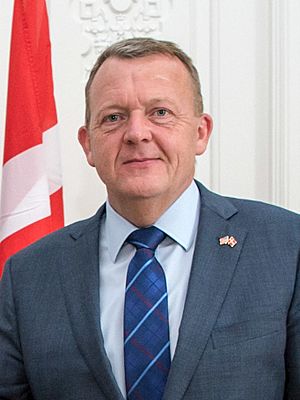 Rasmussen has also been mayor of Frederiksborg County north of Copenhagen from 1998 to 2001. He holds a degree in law from the University of Copenhagen. He is married and has three children.

On 6 June 2019, he resigned from his position as prime minister after a general election, in which his government was narrowly defeated by the Social Democrats and their leader Mette Frederiksen.

All content from Kiddle encyclopedia articles (including the article images and facts) can be freely used under Attribution-ShareAlike license, unless stated otherwise. Cite this article:
Lars Løkke Rasmussen Facts for Kids. Kiddle Encyclopedia.