Publius Ovidius Naso. better known as Ovid in the English-speaking world, was an Ancient Roman poet. He was born on March 20, 43 BC in Sulmona, then called Sulmo. People today do not know when he died. It was probably either 17 AD or 18 AD. He died in Tomis, which is modern-day Constanţa in Romania.

With Virgil and Horace he is considered among the three great poets of Latin literature. Ovid usually wrote in verses. Ovid was the most widely read classical author in medieval times and the Renaissance. 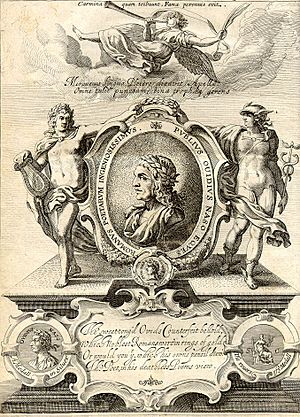 All content from Kiddle encyclopedia articles (including the article images and facts) can be freely used under Attribution-ShareAlike license, unless stated otherwise. Cite this article:
Publius Ovidius Naso Facts for Kids. Kiddle Encyclopedia.