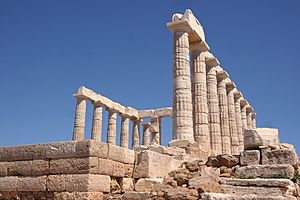 Cape Sounion is noted as the site of ruins of an ancient Greek temple of Poseidon, the god of the sea in classical mythology. The remains are perched on the headland, surrounded on three sides by the sea.

Classical mythology or Greco-Roman mythology is both the body of and the study of myths from the ancient Greeks and Romans as they are used or transformed by cultural reception. Along with philosophy and political thought, mythology represents one of the major survivals of classical antiquity throughout later Western culture. The Greek word mythos refers to the spoken word or speech, but it also denotes a tale, story or narrative.

Classical mythology has provided subject matter for all forms of visual, musical, and literary art in the West, including poetry, drama, painting, sculpture, opera, and ballet, as well as forms of popular culture such as Hollywood movies, television series, comic books, and video games. Classical myths are also alluded to in scientific naming, particularly in astronomy, chemistry, and biology, and in the psychoanalytic theory of Freud and the archetypal psychology of Jung.

During the Middle Ages and Renaissance, when Latin remained the dominant language in Europe for international educated discourse, mythological names almost always appeared in Latinized form. With the Greek revival of the 19th century, however, Greek names began to be used more often, with both "Zeus" and "Jove" being widely used as the name of the supreme god of the classical pantheon.

Classical mythology is a term often used to designate the myths belonging to the Greek and Roman traditions. The myths are believed to have been acquired first by oral tradition. All literary works relating to mythology, are known as mythography and those who wrote them as mythographers. A classical myth as it appears in later Western culture is usually a mix of various versions from both Greek and Latin sources.

Greek myths were narratives related to ancient Greek religion, often concerned with the actions of gods and other supernatural beings and of heroes who transcend human bounds.

Roman myths are traditional stories pertaining to ancient Rome's legendary origins, religious institutions, and moral models, with a focus on human actors and only occasional intervention from deities but a pervasive sense of divinely ordered destiny.

The myths as they appear in popular culture of the 20th and 21st centuries often have only a close relation to the stories as told in ancient Greek and Latin literature.

All content from Kiddle encyclopedia articles (including the article images and facts) can be freely used under Attribution-ShareAlike license, unless stated otherwise. Cite this article:
Classical mythology Facts for Kids. Kiddle Encyclopedia.