List of figures in Greek mythology facts for kids

This is a list of gods, goddesses, people and other figures from Greek mythology. They are sorted into sections below. The immortals include gods (deities), spirits and giants. Being immortal means that they live forever. The mortals include heroes, kings, Amazons and other people. The list does not include creatures.

These figures are described by ancient writers, the oldest of which are Homer and Hesiod. The Greeks created images of their deities for many reasons. A temple would house the statue of a god or goddess, or several deities. The statue might be decorated with relief scenes depicting myths. These were also often painted on pottery and minted on coins.

Roman mythology includes many of the same figures, but uses different names: calling Zeus by the name of Jupiter, and Aphrodite by the name of Venus, for example.

The main and most important gods were the Twelve Olympians. The home of these gods is at the top of Mount Olympus. There was some variation as to which deities were included in the Twelve. As such, the list below numbers fourteen. It includes all those who are commonly named as one of the Twelve in art and poetry. Dionysus was a later addition; in some descriptions, he replaced Hestia. Hades is not usually included among the Olympians, because his home was the underworld. Some writers, however, such as Plato, named him as one of the Twelve. 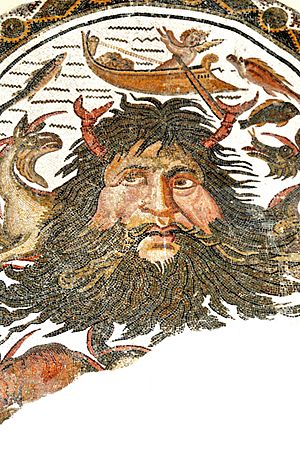 Pontus in an ancient Roman mosaic from Tunisia 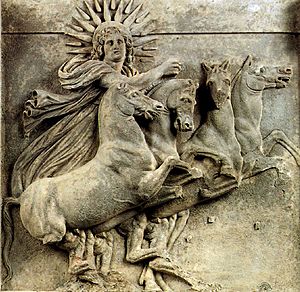 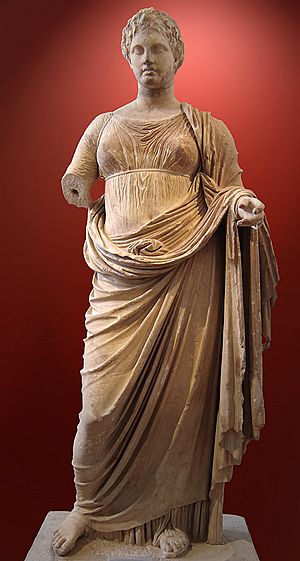 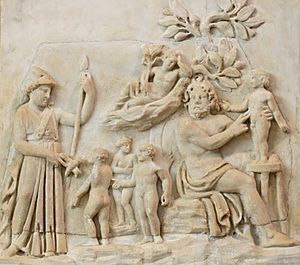 The Titans are the older kind of gods in Greek mythology. The original Twelve Titans were children of Gaia (Mother Earth) and Uranus (Father Sky). Their leader was Cronus, who overthrew his father Uranus and became ruler of the gods. Cronus' consort was his sister Rhea. Their children were Zeus, Hades, Poseidon, Hera, Demeter and Hestia. Cronus and the Titans were overthrown by Zeus, his youngest son. They fought a war called the Titanomachy. The Titans are depicted in Greek art less often than the Olympians. 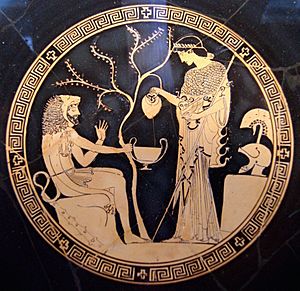 Athena pouring a drink for Heracles, who wears the skin of the Nemean lion.

Seers were prophets, people who were said to be able to see the future or predict events before they happened.

All content from Kiddle encyclopedia articles (including the article images and facts) can be freely used under Attribution-ShareAlike license, unless stated otherwise. Cite this article:
List of figures in Greek mythology Facts for Kids. Kiddle Encyclopedia.