Kids Encyclopedia Facts
This page is about the Greek god of time. For the Titan, see Kronos. 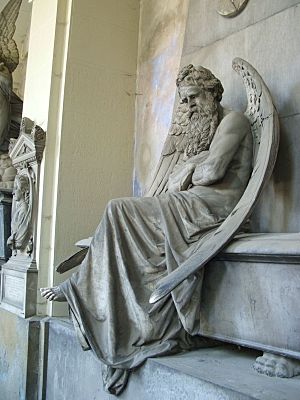 Chronos (Ancient Greek: Χρόνος, "time", also written as Khronos or Chronus) is the Greek God of time. He is the personification of time in philosophy before Socrates, and in later literature. Chronos controls the past, present, and future of everything. Without Chronos, the other Greek Gods would have never existed. 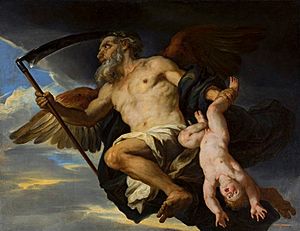 Chronos and his Child by Giovanni Francesco Romanelli, National Museum in Warsaw, a 17th century depiction of Titan Cronus as "Father Time," wielding a harvesting scythe

In the Orphic cosmogony, Chronos never ages. He gives birth to Aether and Chaos, and made a silvery egg in the divine Aether. It produced the god Phanes. Phanes gave birth to the first generation of gods and is the creator of the cosmos.

All content from Kiddle encyclopedia articles (including the article images and facts) can be freely used under Attribution-ShareAlike license, unless stated otherwise. Cite this article:
Chronos Facts for Kids. Kiddle Encyclopedia.