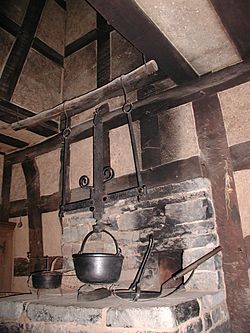 A hearth (har-th) is a brick or stone lined fireplace or oven that is used for cooking and heating. Historically, the hearth was the center of the home, as it provided heat for the house. Its Latin name is focus. That is why "focus" is used for many kinds of central point.

All content from Kiddle encyclopedia articles (including the article images and facts) can be freely used under Attribution-ShareAlike license, unless stated otherwise. Cite this article:
Hearth Facts for Kids. Kiddle Encyclopedia.