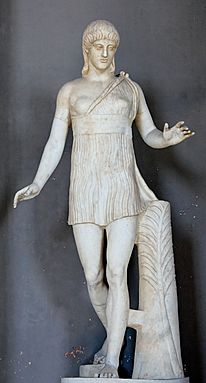 A statue of Atalanta

Atalanta ( Greek: Ἀταλάντη Atalantē) is person who is in Greek mythology. She was a virgin and was a huntress.

Atalanta was the daughter of Iacus who was an Arcadian princess. Her father King Iasus wanted a son. Atalanta was born and King Iasus left her on a mountaintop to die. Some stories say that a bear raised her. She reunited with her father afterwards.

All content from Kiddle encyclopedia articles (including the article images and facts) can be freely used under Attribution-ShareAlike license, unless stated otherwise. Cite this article:
Atalanta Facts for Kids. Kiddle Encyclopedia.