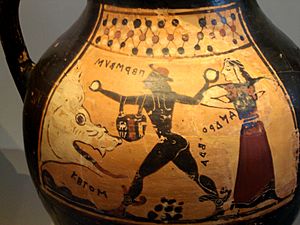 In Ancient Greek mytholoy Ceto is the name of a sea monster;often represented as a whale, or a large fish. She is the daughter of Pontos and Gaia. Together with her brother Phorcys she bore the Gorgons, and Graeae, Echidna and Ladon.

Note there is also a minor oceanid called Keto. There are also various mythological beings referred to as ketos (plural ketea); this is a general term for "sea monster" in Ancient Greek.

All content from Kiddle encyclopedia articles (including the article images and facts) can be freely used under Attribution-ShareAlike license, unless stated otherwise. Cite this article:
Ceto Facts for Kids. Kiddle Encyclopedia.