Kids Encyclopedia Facts
This page is about the Greek mythological prophet. For other uses, see Cassandra (disambiguation).

Cassandra by Evelyn De Morgan (1898, London); Cassandra in front of the burning city of Troy at the peak of her insanity.

Cassandra (Greek: Κασσάνδρα also Κασάνδρα), also known as Alexandra or Kassandra, was a daughter of King Priam and of Queen Hecuba of Troy. In modern usage her name is employed as a rhetorical device to indicate someone whose prophesies are not believed by those around them.

A common version of her story relates how, in an effort to seduce her, Apollo gave her the power of prophecy—but when she refused him, he spat into her mouth to inflict a curse that nobody would ever believe her prophecies. In an alternative version, she fell asleep in a temple, and snakes licked (or whispered in) her ears so that she could hear the future. (A snake as a source of knowledge is a recurring theme in Greek mythology, though sometimes the snake brings understanding of the language of animals rather than an ability to know the future. Likewise, prophets without honor in their own country reflect a standard narrative trope.)

Cassandra became a figure of epic tradition and of tragedy.

Fall of Troy and aftermath 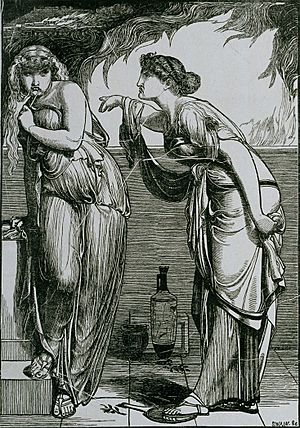 Cassandra foresaw the destruction of Troy. She warned the Trojans about the Greeks hiding inside the Trojan Horse, Agamemnon’s death and her own demise at the hands of Aegisthus and Clytemnestra, her mother Hecuba's fate, Odysseus’s ten year wanderings before returning to his home, and the murder of Aegisthus and Clytemnestra by her children Electra and Orestes. Cassandra predicted that her cousin Aeneas would escape during the fall of Troy and found a new nation in Rome. However, she was unable to do anything to forestall these tragedies since no one believed her.

Coroebus and Othronus came to the aid of Troy during the Trojan War out of love for Cassandra in exchange for her hand in marriage. Priam decided to betroth Cassandra to Telephus’s son Eurypyplus after Telephus had reinforced the Trojans by sending them an army of Mysians to come to defend Troy for them. Cassandra was also the first to see the body of her brother Hector being brought back to the city.

In The Fall of Troy told by Quintus Smyrnaeus, Cassandra had attempted to warn the Trojan people that she had foreseen the Greek warriors hiding in the Trojan Horse while they were celebrating their victory over the Greeks with feasting. They disbelieved her, calling her names and degrading her with insults. She grabbed an axe in one hand and a burning torch in her other, and ran towards the Trojan Horse, intent on destroying it herself to stop the Greeks from destroying Troy. The Trojan people stopped her before she could do so. The Greeks hiding inside the Trojan Horse were relieved that the Trojans had stopped Cassandra from destroying it, but they were surprised by how well she had known of their plan to defeat Troy.

At the fall of Troy, Cassandra sought shelter in the temple of Athena and there she embraced the wooden statue of Athena in supplication for her protection, where she was abducted by Ajax the Lesser. Cassandra was clinging so tightly to the statue of the goddess that Ajax knocked it over from its stand as he dragged her away. One account claimed that even Athena, who had worked hard to help the Greeks destroy Troy, was not able to restrain her tears and her cheeks burned with anger. Ajax's actions were a sacrilege because Cassandra was a supplicant of Athena and supplicants were untouchable in the sanctuary of a god, under the protection of that god. The Locrians had to atone for Ajax's great sacrilege against Cassandra in Athena's temple by sending two maidens to Troy every year for a thousand years to serve as slaves in Athena's temple—but if they were caught by the inhabitants before they reached the temple they were executed.

Cassandra was sent to the Elysian Fields after her death, as her soul was judged worthy because of her dedication to the gods and her religious nature during her life.

Cassandra was buried either at Amyclae or Mycenae for the two towns disputed the possession of it. She had been buried most likely in Mycenae. Heinrich Schliemann was certain that he had discovered Cassandra’s tomb when he had excavated Mycenae since he had found the remains of a woman and two infants in one of the circle graves at Mycenae.

All content from Kiddle encyclopedia articles (including the article images and facts) can be freely used under Attribution-ShareAlike license, unless stated otherwise. Cite this article:
Cassandra Facts for Kids. Kiddle Encyclopedia.