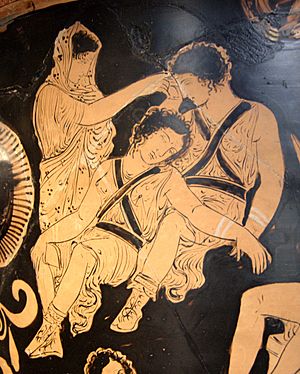 Detail view of a Greek vase painting. It shows Klytaimnestra with the Erinyes. It is from the Louvre in Paris.

Clytemnestra (Greek: Κλυταιμνήστρα, Klytaimnḗstra) was the wife of Agamemnon and queen of Mycenae (or sometimes Argos) in ancient Greek legend. She was married to Agamemnon, King of Mycenae. With him her children were Iphigenia, Elektra, Orestes and Chrysothemis. 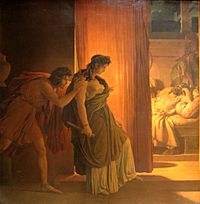 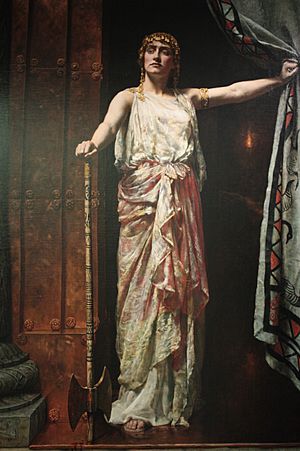 Clytemnestra was the daughter of Tyndareus and Leda, the King and Queen of Sparta. According to the myth, Zeus appeared to Leda in the form of a swan. Leda produced four offspring Castor, Clytemnestra, Helen and Polydeuces (Pollux).

All content from Kiddle encyclopedia articles (including the article images and facts) can be freely used under Attribution-ShareAlike license, unless stated otherwise. Cite this article:
Clytemnestra Facts for Kids. Kiddle Encyclopedia.