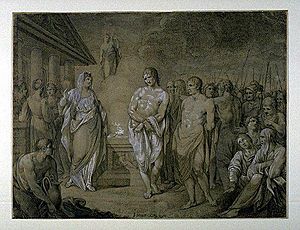 In Greek mythology, Iphigenia ( Ancient Greek: Ἰφιγένεια, Iphigeneia) was a daughter of King Agamemnon and Queen Clytemnestra, and thus a princess of Argos. Agamemnon offends the goddess Artemis, who retaliates by commanding him to kill Iphigenia as a sacrifice so his ships can sail to Troy. In some versions, Iphigenia is sacrificed at Aulis, but in others, Artemis rescues her. In the version where she is saved, she goes to the Taurians and meets her brother Orestes.

"Iphigenia" means "strong-born," "born to strength," or "she who causes the birth of strong offspring."

All content from Kiddle encyclopedia articles (including the article images and facts) can be freely used under Attribution-ShareAlike license, unless stated otherwise. Cite this article:
Iphigenia Facts for Kids. Kiddle Encyclopedia.