Castor and Pollux facts for kids 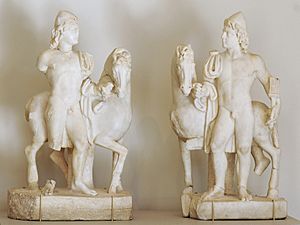 A pair of Roman statuettes (3rd century AD) depicting the Dioscuri as horsemen.

Castor and Pollux were twin brothers in Greek and Roman mythology. Together they are called the Dioscuri. They were the sons of Leda. Their twin sisters were Helen of Troy and Clytemnestra.

In the myth the twins shared the same mother but had different fathers which meant that Pollux was immortal and Castor was mortal. When Castor died, Pollux asked Zeus to let him share his own immortality with his twin to keep them together and they were transformed into the Gemini constellation. The pair were regarded as the patrons of sailors, to whom they appeared as St. Elmo's fire.

Ancient Greek authors tell a number of versions of the story of Castor and Pollux. Homer portrays them initially as ordinary mortals, treating them as dead in the Iliad, but in the Odyssey they are treated as alive even though "the corn-bearing earth holds them." The author describes them as "having honour equal to gods," living on alternate days due to the intervention of Zeus. In both the Odyssey and in Hesiod, they are described as the sons of Tyndareus and Leda. In Pindar, Pollux is the son of Zeus while Castor is the son of the mortal Tyndareus. The theme of ambiguous parentage is not unique to Castor and Pollux; similar characterisations appear in the stories of Hercules and Theseus. 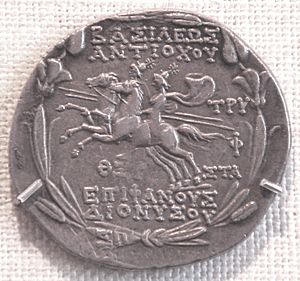 Coin of Antiochus VII with Dioskouroi

Castor and Pollux are constantly associated with horses in art and literature. They bear striking similarities in this respect to divine twins in other mythologies, especially the Vedic Ashvins, who like them have a close association with horses. Their role as horsemen made them particularly attractive to the Roman equites and cavalry. Each year on July 15, the feast day of the Dioskouroi, the 1,800 equestrians would parade through the streets of Rome in an elaborate spectacle in which each rider wore full military attire and whatever decorations he had earned.

The twins were widely depicted as helmeted horsemen carrying spears. The Pseudo-Oppian manuscript depicts the brothers hunting, both on horseback and on foot. On votive reliefs they are depicted with a variety of symbols representing the concept of twinhood, such as the dokana (δόκανα - two upright piece of wood connected by two cross-beams), a pair of amphorae, a pair of shields, or a pair of snakes. They are also often shown wearing felt caps, above which stars may be depicted. They are depicted on metopes from Delphi showing them on the voyage of the Argo (Ἀργώ) and rustling cattle with Idas. Greek vases regularly show them. They can be recognized in some vase-paintings by the skull-cap they wear, the pilos (πῖλος), which was already explained in Antiquity as the remnants of the egg from which they hatched.

All content from Kiddle encyclopedia articles (including the article images and facts) can be freely used under Attribution-ShareAlike license, unless stated otherwise. Cite this article:
Castor and Pollux Facts for Kids. Kiddle Encyclopedia.