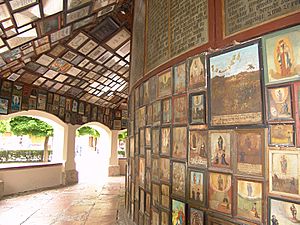 Votive paintings in the ambulatory of the Chapel of Grace, in Altötting, Bavaria, Germany

A votive offering or votive deposit is one or more objects displayed or deposited, without the intention of recovery or use, in a sacred place for religious purposes. Such items are a feature of modern and ancient societies and are generally made in order to gain favor with supernatural forces.

All content from Kiddle encyclopedia articles (including the article images and facts) can be freely used under Attribution-ShareAlike license, unless stated otherwise. Cite this article:
Votive offering Facts for Kids. Kiddle Encyclopedia.