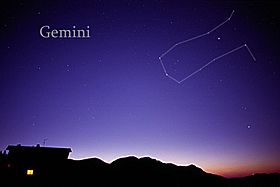 The constellation Gemini as it can be seen with the naked eye, with added connecting lines.

An animation of the constellation Gemini (center), "the twins", shows two parallel stick figures. Gemini is associated with the myth of Castor and Polydeuces (also known as Pollux). They are all known as the Dioscuri.

Gemini lies between Taurus to the west and Cancer to the east. Auriga and Lynx are to the north. Monoceros and Canis Minor are to the south. 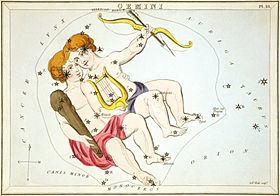 Gemini as depicted in Urania's Mirror, a set of constellation cards published in London c.1825.

In Babylonian astronomy, the stars Castor and Pollux were known as the Great Twins (MUL.MASH.TAB.BA.GAL.GAL). The Twins were thought of as minor gods. They were called Meshlamtaea and Lugalirra. These names meant 'The One who has arisen from the Underworld' and the 'Mighty King'. Both names can be understood as titles of Nergal, the major Babylonian god of plague and pestilence. He was king of the Underworld. 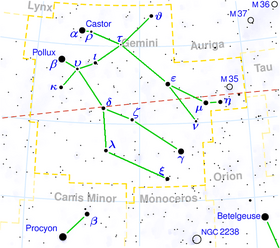 Diagram of H.A. Rey's alternative way to connect the stars of the constellation Gemini. Twins are shown holding hands.

Castor and Pollux are the brightest stars in Gemini. They are two bright stars that appear very close together forming an o shape.

All content from Kiddle encyclopedia articles (including the article images and facts) can be freely used under Attribution-ShareAlike license, unless stated otherwise. Cite this article:
Gemini (constellation) Facts for Kids. Kiddle Encyclopedia.