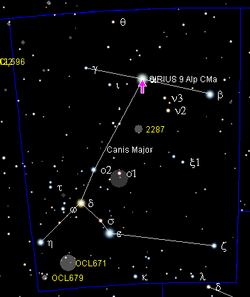 Sirius. in the constellation, Canis Major, is the brightest star in the night sky (apparent magnitude -1.42).

In astronomy, magnitude is the logarithmic measure of the brightness of an object. It is measured in a specific wavelength or passband, usually in optical or near-infrared wavelengths. The Sun has an apparent magnitude of −27, a full moon −13 and the brightest planet Venus measures −5. The brightest man-made objects, Iridium flares, are ranked at −9 and the International Space Station measures −6.

The Greek astronomer Hipparchus first invented our system of apparent magnitude. He gave the brightest stars a magnitude of 1 and increased the numbers for dimmer stars. About 300 years later Ptolemy of Alexandria created an encyclopedia of stars based on Hipparchus' work. The Persian astronomer Al-Sufi took Ptolemy's work and gave Arabic names to the stars some 800 years later. Medieval European astronomers simply translated Al-Sufi's work into Latin which is why many stars today have Arabic names.

All content from Kiddle encyclopedia articles (including the article images and facts) can be freely used under Attribution-ShareAlike license, unless stated otherwise. Cite this article:
Magnitude (astronomy) Facts for Kids. Kiddle Encyclopedia.