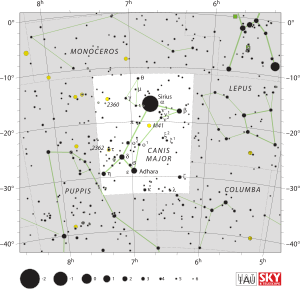 The star Sirius is in Canis Major. Sirius has a magnitude of -1.44, which means that it is the brightest star in the night sky. It is sometimes called the "dog star." Also, Sirius is only 8.6 light years away from Earth, which is very close.

All content from Kiddle encyclopedia articles (including the article images and facts) can be freely used under Attribution-ShareAlike license, unless stated otherwise. Cite this article:
Canis Major Facts for Kids. Kiddle Encyclopedia.