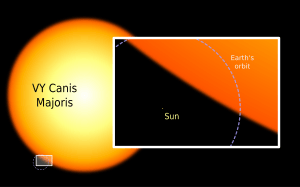 VY Canis Majoris (VY CMa) is a red hypergiant star in the constellation Canis Major. It is about 1.2 kiloparsecs (3,900 light-years) distant from Earth. It is one of the Largest known Stars in the universe, and one of the most luminous of its type.

VY Canis Majoris is 1,420 times wider than the Sun. If placed at the center of the Solar System, VY Canis Majoris's surface would extend beyond Jupiter's orbit. However, there is still some variation in the size estimates as other estimates of the radius make it larger than the orbit of Saturn.

When it dies it is expected to explode to a Supernova and then turn into a Black hole.

All content from Kiddle encyclopedia articles (including the article images and facts) can be freely used under Attribution-ShareAlike license, unless stated otherwise. Cite this article:
VY Canis Majoris Facts for Kids. Kiddle Encyclopedia.