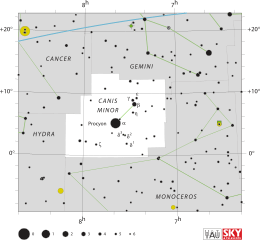 Canis Minor is a constellation in the northern sky. It is Latin for "smaller dog" or "the lesser dog". The astronomer Ptolemy listed it when he made a list of 48 constellations in the 2nd century. Both Canis Minor and Canis Major (which means "larger dog" in Latin) represent dogs that follow the hunter named Orion in Greek Mythology.

The main shape of Canis Minor is made by two stars, which are named Procyon (Alpha Canis Minoris) and Gomeisa (Beta Canis Minoris). These stars are the only stars in Canis Minor that have a magnitude that is brigher than 4. Procyon has a magnitude of 0.39, which means that it is the seventh brightest star in the night sky. It is also very close to Earth, since it is only 11.4 light years away. Procyon is a binary star, which means that it actually has two stars that orbit each other. It has a white dwarf star and a white type F5 main-sequence star. Gomeisa has a magnitude of 2.9. Its temperature is 11,500°K, which means that it is very hot. It is a blue type B8 main-sequence star. It is 3 times the mass of the sun and 250 times more luminous than the sun.

All content from Kiddle encyclopedia articles (including the article images and facts) can be freely used under Attribution-ShareAlike license, unless stated otherwise. Cite this article:
Canis Minor Facts for Kids. Kiddle Encyclopedia.