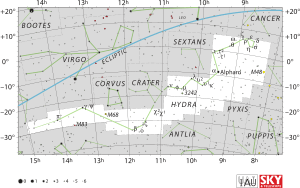 Hydra is a constellation that has parts in the northern sky and parts in the southern sky. It is the biggest constellation. It represents a water snake. The astronomer named Ptolemy listed Hydra when he made a list of 48 constellations. It is also one of the 88 modern constellations that were made by the International Astronomical Union.

Even though Hydra is a very big constellation, it only has one bright star. This star is named Alphard. Alphard means "the solitary one" in Arabic. Hydra actually has little to identify it exept for a cluster of stars at its head.

All content from Kiddle encyclopedia articles (including the article images and facts) can be freely used under Attribution-ShareAlike license, unless stated otherwise. Cite this article:
Hydra (constellation) Facts for Kids. Kiddle Encyclopedia.