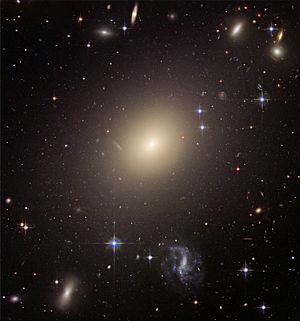 An elliptical galaxy is a galaxy having an ellipsoidal shape, and a smooth, nearly featureless brightness profile. They are one of the three main types of galaxy originally described by Edwin Hubble in 1936. The others are spiral and lenticular galaxies.

Most elliptical galaxies are composed of older, low-mass stars, with a sparse interstellar medium and minimal (or no)star formation activity. They tend to be surrounded by large numbers of globular clusters. Elliptical galaxies are believed to make up approximately 10–15% of galaxies in the Virgo Supercluster, but are not the dominant type of galaxy in the universe overall. They are usually found close to the centers of galaxy clusters.

Elliptical galaxies and lenticular galaxies are also called "early-type" galaxies (ETG), due to their position in the Hubble sequence. They are less common in the early Universe, that is, in galaxies further away from us.

All content from Kiddle encyclopedia articles (including the article images and facts) can be freely used under Attribution-ShareAlike license, unless stated otherwise. Cite this article:
Elliptical galaxy Facts for Kids. Kiddle Encyclopedia.