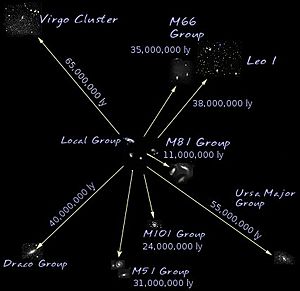 Distances from the Local Group for selected groups and clusters within the Local Supercluster.

The Virgo Supercluster (Virgo SC) or Local Supercluster is the large galaxy cluster that contains the Virgo Cluster and the Local Group. At least 100 galaxies and clusters are in it.

The diameter of Virgo SC is 33 megaparsecs (110 million light-years). It is one of millions of superclusters in the observable universe.

When the first large sample of nebulae was published by William and John Herschel in 1863, it was seen that there is a marked excess of nebular fields in the constellation Virgo (near the north galactic pole).

In the 1950s, it was suggested that this excess was a large-scale galaxy-like structure, a "Local Supercluster". Debate went on during the 1960s and 1970s as to whether the Local Supercluster (LS) was actually a structure or a chance alignment of galaxies. The issue was resolved with the large redshift surveys of the late 1970s and early 1980s, which showed a flattened concentration of galaxies along the supergalactic plane.

In 1982 R. Brent Tully showed it consists of two components: a flattened disk with two-thirds of the supercluster's luminous galaxies, and a roughly spherical halo containing the remaining one-third. The disk itself is a thin (~1 megaparsecs) ellipsoid with a long axis / short axis ratio of at least 6 to 1, and possibly as high as 9 to 1.

Data released in June 2003 from a redshift survey lets astronomers compare the LS to other superclusters. The LS represents a typical poor (that is, it lacks a high density core) supercluster of rather small size. It has one rich galaxy cluster in the center, surrounded by filaments of galaxies and poor groups.

Error: No valid link was found at the end of line 6.

All content from Kiddle encyclopedia articles (including the article images and facts) can be freely used under Attribution-ShareAlike license, unless stated otherwise. Cite this article:
Virgo Supercluster Facts for Kids. Kiddle Encyclopedia.