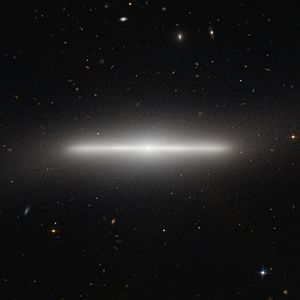 A lenticular galaxy is a type of irregular galaxy. These galaxies have an elliptical shape and ill-defined spiral arms. Basically, they are a combinations of spiral and elliptical galaxies. Examples include the Cartwheel galaxy and NGC 4479.

All content from Kiddle encyclopedia articles (including the article images and facts) can be freely used under Attribution-ShareAlike license, unless stated otherwise. Cite this article:
Lenticular galaxy Facts for Kids. Kiddle Encyclopedia.