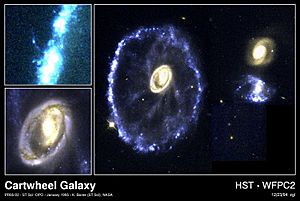 A spectacular head-on collision between two galaxies is seen in this NASA Hubble Space Telescope true-color image of the Cartwheel Galaxy. 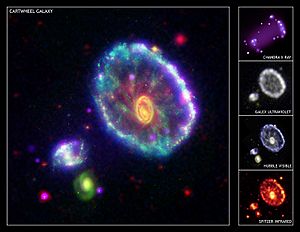 The Cartwheel galaxy (also known as ESO 350-40) is a lenticular galaxy about 500 million light-years away in the constellation Sculptor.

It was discovered by Fritz Zwicky in 1941. Zwicky said his discovery was "one of the most complicated structures awaiting its explanation on the basis of stellar dynamics".

The Cartwheel galaxy shows radio and optical spokes, but they are not the same spokes.

The galaxy was a normal spiral galaxy before it had a collision with a smaller galaxy about 200 million years ago. When the nearby galaxy passed through the Cartwheel Galaxy, the power of the collision sent a strong shock wave through the galaxy. Moving at high speed, the shock wave moved gas and dust. This made a starburst around the galaxy's center. This explains the blue colored ring around the center, bright section. It can be seen that the galaxy is beginning to take the shape of a normal spiral galaxy again, as spiral arms (The spokes) are spreading out from a central core.

There are other possible explanations of the ring-like appearance.

All content from Kiddle encyclopedia articles (including the article images and facts) can be freely used under Attribution-ShareAlike license, unless stated otherwise. Cite this article:
Cartwheel galaxy Facts for Kids. Kiddle Encyclopedia.