Ursa Major is a constellation that can be seen in the northern hemisphere and part of the southern hemisphere. Its name means Great Bear in Latin. It was named that because many different groups of people around the world have thought that its stars look a lot like a bear with a long tail. It is often used as a symbol for north. 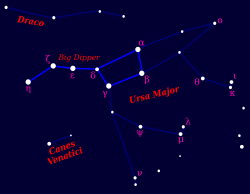 All of the stars in the Big Dipper except Dubhe and Alkaid are moving toward the same point in the sky through proper motion. This group of stars is known as the Ursa Major Moving Group.