Messier 81 (also known as NGC 3031 or Bode's Galaxy) is a spiral galaxy. It is in the constellation Ursa Major. It is large. It is about 12 million light-years from Earth. It has an active galactic nucleus (which has a supermassive black hole). For these reasons Messier 81 has been well studied by professional astronomers. The galaxy is large and very bright. This makes it a popular object for amateur astronomers to look at.

Messier 81 was first discovered by Johann Elert Bode on 31 December 1774. Thus, it is sometimes referred to as "Bode's Galaxy". In 1779, Pierre Méchain and Charles Messier reidentified Bode's object, hence listed it in the Messier Catalogue.

The galaxy is to be found approximately 10° northwest of Alpha Ursae Majoris (Dubhe) along with several other galaxies in the Messier 81 Group. Its apparent magnitude due to its distance means it requires a good night sky and only rises very briefly and extremely low at its southernmost limit from Earth's surface, about the 20th parallel south.

Messier 81 and Messier 82 are considered ideal for viewing using binoculars and small telescopes. The two objects are generally not observable to the unaided eye, although highly experienced amateur astronomers may be able to see Messier 81 under exceptional observing conditions with a very dark sky. Telescopes with apertures of 8 inches (20 cm) or larger are needed to distinguish structures in the galaxy. 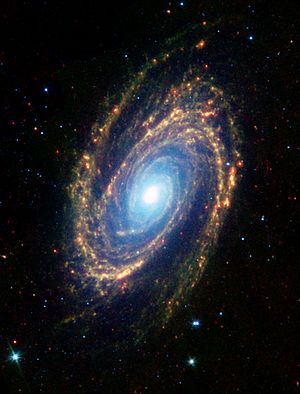 Most of the emission at infrared wavelengths originates from interstellar dust. This interstellar dust is found primarily within the galaxy's spiral arms, and it has been shown to be associated with star formation regions. The general explanation is that the hot, short-lived blue stars that are found within star formation regions are very effective at heating the dust and thus enhancing the infrared dust emission from these regions. 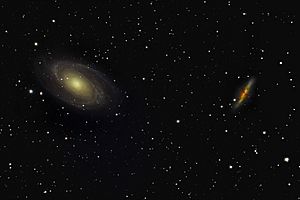 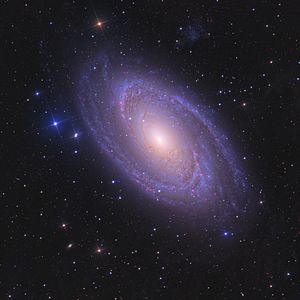 Only one supernova has been detected in Messier 81. The supernova, named SN 1993J, was discovered on 28 March 1993 by F. García in Spain. At the time, it was the second brightest supernova observed in the 20th century, peaking at an apparent magnitude of 10.7. The spectral characteristics of the supernova changed over time. Initially, it looked more like a type II supernova (a supernova formed by the explosion of a giant star) with strong hydrogen spectral line emission, but later the hydrogen lines faded and strong helium spectral lines appeared, making the supernova look more like a type Ib.

Moreover, the variations in SN 1993J's luminosity over time were not like the variations observed in other type II supernovae, but did resemble the variations observed in type Ib supernovae. Hence, the supernova has been classified as a type IIb, a transitory class between type II and type Ib. The scientific results from this supernova suggested that type Ib and Ic supernovae were formed through the explosions of giant stars through processes similar to those taking place in type II supernovae. Despite the uncertainties in modeling the unusual supernova, it was also used to estimate a very approximate distance of 8.5 ± 1.3 Mly (2.6 ± 0.4 Mpc) to Messier 81. As a local galaxy, the Central Bureau for Astronomical Telegrams (CBAT) tracks novae in M81 along with M31 and M33.

Messier 81 is the largest galaxy in the M81 Group, a group of 34 in the constellation Ursa Major. At approximately 11.7 Mly (3.6 Mpc) from the Earth, it makes this group and the Local Group, containing the Milky Way, relative neighbors in the Virgo Supercluster.

Gravitational interactions of M81 with M82 and NGC 3077 have stripped hydrogen gas away from all three galaxies, forming gaseous filamentary structures in the group. Moreover, these interactions have allowed interstellar gas to fall into the centers of M82 and NGC 3077, leading to vigorous star formation or starburst activity there.

All content from Kiddle encyclopedia articles (including the article images and facts) can be freely used under Attribution-ShareAlike license, unless stated otherwise. Cite this article:
Messier 81 Facts for Kids. Kiddle Encyclopedia.