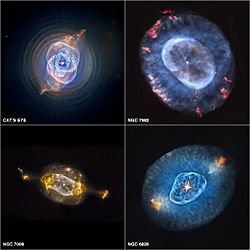 The New General Catalogue of Nebulae and Clusters of Stars is a list of stars and nebulae. It is abbreviated NGC, and is sometimes called just New General Catalogue. It has 7,840 objects on it. These objects are called "NGC objects". It was created by John Louis Emil Dreyer in 1888. It's the most famous and known deep-sky catalogue for amateur astronomy. Most of observations were rewarded by William Herschel and his son, and expanded by the known catalogue Index Catalogues I and II, adding about 5000 new objects. South Hemisphere objects are less studied than North Hemisphere objects, observed by John Herschel. New General Catalogue had some mistakes, that were corrected in a special revised edition: RNGC 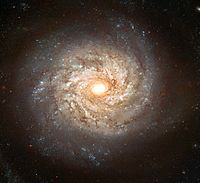 Spiral galaxy NGC 3982, with blue clusters and dark regions. You can see this galaxy with a little telescope in Ursa Major constellation 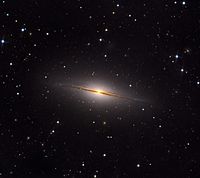 NGC 7814, spiral galaxy in Pegasus constellation. It has more than 15 denominations 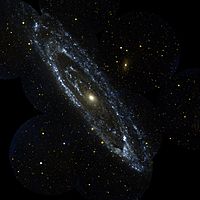 The Andromeda Galaxy or NGC 224 it's a galaxy in Andromeda constellation. It's one of the most visible, known and brightest galaxies.

All content from Kiddle encyclopedia articles (including the article images and facts) can be freely used under Attribution-ShareAlike license, unless stated otherwise. Cite this article:
New General Catalogue Facts for Kids. Kiddle Encyclopedia.