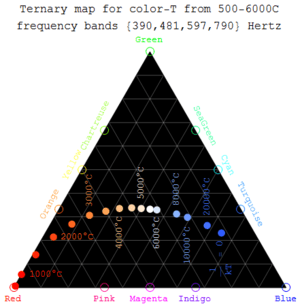 In astronomy, stellar classification is a way of grouping stars by temperature. Star temperature can be measured by looking at its light spectrum, color which the star shines.

Stars are also grouped into spectral types or classes by color.

In general, a star's temperature determines its color, from red to blue-white. Spectral types are named with a letter. The seven main types are M, K, G, F, A, B and O. M stars are the coldest stars and O stars are the hottest. The full system contains other types that are hard to find: W, R, N, and S.

The closest star to the Earth, the sun, is a class G star.

Classification of stars from O to M.

The mass, radius, and luminosity listed for each class are appropriate only for stars on the main-sequence portion of their lives and so are not appropriate for red giants.

The spectral classes O through M are subdivided by Arabic numerals (0–9). For example, A0 denotes the hottest stars in the A class and A9 denotes the coolest ones. The Sun is classified as G2. 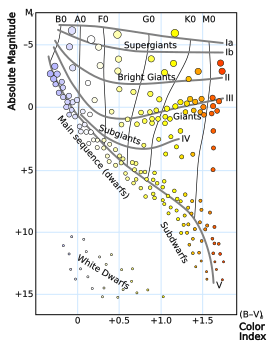 The Hertzsprung-Russell diagram is more often used in astronomy, because it relates three important variables: the absolute magnitude, the luminosity and the surface temperature. It is as important to astronomy as the periodic table is to chemistry.

The conventional color descriptions are traditional in astronomy, and represent colors relative to the mean color of an A-class star which is considered to be white. The apparent color descriptions are what the observer would see if trying to describe the stars under a dark sky without aid to the eye, or with binoculars.

The Sun itself is white, though it is sometimes called a yellow star.

All content from Kiddle encyclopedia articles (including the article images and facts) can be freely used under Attribution-ShareAlike license, unless stated otherwise. Cite this article:
Stellar classification Facts for Kids. Kiddle Encyclopedia.