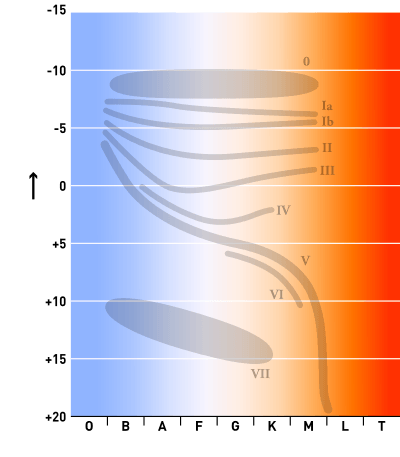 These stars are of particular interest in the search for extraterrestrial life because they are stable on the main sequence for a very long time (18 to 34 billion years, compared to 10 billion for the Sun). Like M-type stars, they tend to have a very small mass, leading to their extremely long lifespan that offers plenty of time for life to develop on orbiting Earth-like, terrestrial planets. In addition, K-type stars emit less ultraviolet radiation (which can damage DNA and thus hamper the emergence of nucleic acid based life) than G-type stars like the Sun. In fact, many peak in the red. K-type main-sequence stars are also about three to four times as abundant as G-type main-sequence stars, making planet searches easier. While M-type stars are also very abundant, they are more likely to have tidally locked planets in orbit and are more prone to produce solar flares that would more easily strike nearby rocky planets, making it much harder for life to develop. Due to their greater heat, the habitable zones of K-type stars are also much wider than those of M-type stars. For all of these reasons, they may be the most favorable stars to focus on in the search for exoplanets and extraterrestrial life.

Some of the nearest K-type stars known to have planets include Epsilon Eridani, HD 192310, Gliese 86, and 54 Piscium.

All content from Kiddle encyclopedia articles (including the article images and facts) can be freely used under Attribution-ShareAlike license, unless stated otherwise. Cite this article:
K-type main-sequence star Facts for Kids. Kiddle Encyclopedia.