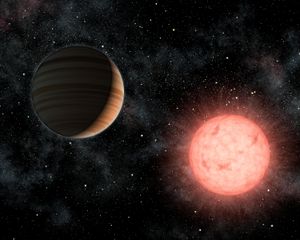 A red dwarf is a kind of star. Red dwarf stars are smaller than half the size of the Sun. They are also cooler than most stars. Red dwarfs burn their fuel slowly, so they shine with less light than hot stars.

Red dwarfs can live trillions of years, much longer than brighter stars. A red dwarf dies when it burns all of its fuel. To start with, the fuel is the chemical element hydrogen. At present, no red dwarf star is known which has gone beyond this stage.

Red dwarfs are small stars that are around 0.2 solar mass (the sun is equal to 1 solar mass). This is small for a star but is still 60,000 times the mass of the Earth. They are formed in nebulas, like all stars are, and originally they are protostars. They start their nuclear fusion about 100,000 years after being created when they get their red glow, this is also where they get their heat. These stars burn at less than 4,000°K.

All content from Kiddle encyclopedia articles (including the article images and facts) can be freely used under Attribution-ShareAlike license, unless stated otherwise. Cite this article:
Red dwarf Facts for Kids. Kiddle Encyclopedia.