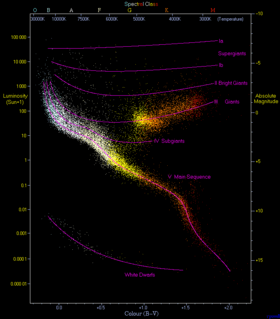 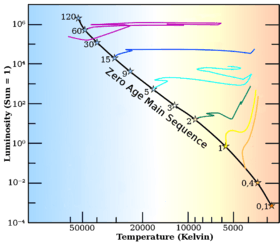 Evolutionary tracks of stars on the H–R diagram: Sun = 1

The vertical axis of a Hertzsprung-Russell diagram shows the luminosity or brightness of the stars, as if they were all measured from the same distance. Another term for this is absolute magnitude. The brighter a star is, the higher its plot will be on this chart.

In general, the temperature of a star relates to its color. At the top of the chart, along with the temperatures, are the Spectral Classes. The hottest stars are blue-white (class O), those in the middle temperatures are yellow (class G) and the coolest ones are red (class M). (Of course, when we say "coolest" about stars, we must realize that the lowest temperature for a star is almost 5000 degrees Fahrenheit.)

As a matter of fact, when Hertzsprung-Russell diagrams were developed in the early 1900's, astronomers did not know how to find out the temperature of a star. The first diagrams plotted stars' absolute magnitude (where adding one meant the brightness would go down by about two and a half times) against color, represented by the spectral classes from blue-white to red.

Regions with many stars

As you can see, stars tend to fall only into certain regions of the diagram when graphed in this way. All stars in a given area of a Hertzsprung-Russell diagram share similar luminosities and temperatures. The main region where stars appear is the diagonal curved line, going from the upper-left (hot and bright) to the lower-right (cooler and less bright). This is called the Main Sequence. Above the main sequence is another region containing the red giants. Below is a curved line representing the white dwarfs.

It was only in the 1930's and 1940's that scientists began to understand the role of nuclear fusion in creating and keeping stars like our sun. These days Hertzsprung-Russell diagrams are used to present stellar evolution in pictures to students. They're not used much any more for developing new scientific theories.

On a Hertzsprung-Russell diagram, our Sun is plotted very close to the middle of the main sequence at the intersection of luminosity 1 and temperature 5780K. Therefore, the sun is class G or a "yellow star").

All content from Kiddle encyclopedia articles (including the article images and facts) can be freely used under Attribution-ShareAlike license, unless stated otherwise. Cite this article:
Hertzsprung–Russell diagram Facts for Kids. Kiddle Encyclopedia.