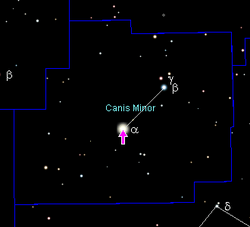 The position of Procyon

Procyon (α CMi, α Canis Minoris, Alpha Canis Minoris) is the brightest star in the constellation Canis Minor. To the naked eye, it appears to be a single star, the eighth brightest in the night sky with a visual apparent magnitude of 0.34.

The reason for its brightness is not its intrinsic luminosity but its relative closeness to the Sun. Its distance was worked out by the European Space Agency Hipparcos astrometry satellite. It is just 11.46 light-years (3.51 parsecs) away, and is one of our nearest stellar neighbours. Its closest neighbour is Luyten's Star, about 1.12 ly (0.34 pc) away.

Procyon forms one of the three vertices of the Winter Triangle, along with Sirius and Betelgeuse. Its colour index is 0.42, and its hue has been described as having a faint yellow tinge to it.

All content from Kiddle encyclopedia articles (including the article images and facts) can be freely used under Attribution-ShareAlike license, unless stated otherwise. Cite this article:
Procyon Facts for Kids. Kiddle Encyclopedia.