Cecilia Helena Payne-Gaposchkin (May 10, 1900 – December 7, 1979) was a British–American astronomer and astrophysicist who, in 1925, proposed in her Ph.D. thesis an explanation for the composition of stars in terms of the relative abundances of hydrogen and helium.

Payne was born in Wendover, England. In 1919, she won a scholarship to Newnham College, Cambridge University. She studied botany, physics, and chemistry. She was not given a degree because women were not given degrees by Cambridge until 1948. In 1923 she moved to the United States. She became an American citizen in 1931.

In 1933, she met Russian-born astrophysicist Sergei I. Gaposchkin in Germany. She married him in 1934. 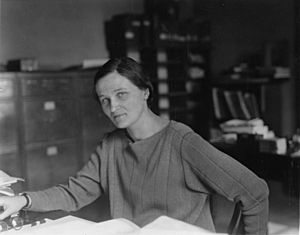 According to G. Kass-Simon and Patricia Farnes, Payne's career marked a turning point at Harvard College Observatory. Under the direction of Harlow Shapley and Dr E. J. Sheridan (whom Payne-Gaposchkin described as a mentor), the observatory had already offered more opportunities in astronomy to women than did other institutions, and notable achievements had been made earlier in the century by Williamina Fleming, Antonia Maury, Annie Jump Cannon, and Henrietta Swan Leavitt. However, with Payne-Gaposchkin's Ph.D., women entered the 'mainstream'.

The trail she blazed into the largely male-dominated scientific community was an inspiration to many. For example, she became a role model for astrophysicist Joan Feynman. Feynman's mother and grandmother had dissuaded her from pursuing science, since they believed women were not physically capable of understanding scientific concepts. But Feynman was later inspired by Payne-Gaposchkin when she came across some of her work in an astronomy textbook. Seeing Payne-Gaposchkin's research published in this way convinced Feynman that she could, in fact, follow her scientific passions.

All content from Kiddle encyclopedia articles (including the article images and facts) can be freely used under Attribution-ShareAlike license, unless stated otherwise. Cite this article:
Cecilia Payne-Gaposchkin Facts for Kids. Kiddle Encyclopedia.