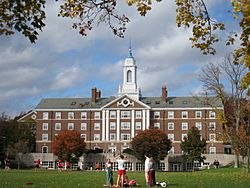 Radcliffe College was a women's liberal arts college in Cambridge, Massachusetts, the female college attached to Harvard University. It was also one of the Seven Sisters colleges.

It shared, with Bryn Mawr College, the popular reputation of students being both intellectually and independently minded. Radcliffe gave Radcliffe College diplomas to undergraduates and graduate students for the first 70 or so years of its history.

All content from Kiddle encyclopedia articles (including the article images and facts) can be freely used under Attribution-ShareAlike license, unless stated otherwise. Cite this article:
Radcliffe College Facts for Kids. Kiddle Encyclopedia.