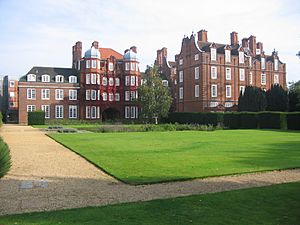 Newnham college buildings from the gardens

Newnham College is one of the colleges of the University of Cambridge, England. It is for women only and has about 500 students. It was created in 1871 by Henry Sidgwick who wanted to make education more available to women. It was built at a time when most colleges where for men only. It was the second college to allow women after Girton. It started just as a group of houses in Regent Street. In 1875 the first buildings were finished in Sidgwick Avenue and the college moved there.

Newnham College has beautiful large gardens that the students can walk on. This is different from the other colleges where only Fellows can walk on the grass. It also has one of the largest libraries in Cambridge, with more than 90,000 books.

Some very important people have studied here. Philippa Fawcett, for example, was the first woman to get the best result in the mathematics course in Cambridge in 1890. Virginia Woolf based her famous book The Room of One's Own around Newnham College. Other people to have studied here include:

All content from Kiddle encyclopedia articles (including the article images and facts) can be freely used under Attribution-ShareAlike license, unless stated otherwise. Cite this article:
Newnham College, Cambridge Facts for Kids. Kiddle Encyclopedia.