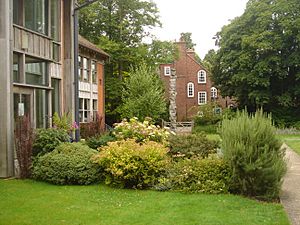 The gardens and library of Lucy Cavendish College

Lucy Cavendish College is one of the colleges of the University of Cambridge, England. It was created in 1956. It only has students which are both women and over 21. This can include postgraduates and undergraduates who are older than usual. It was built by women within the university who thought that women were not treated fairly in Cambridge. At the time in fact most colleges were still for men only. The name comes from Lucy Cavendish (1841-1925), who was very important in making reforms to give more education to women.

Lucy Cavendish is quite a small college with about 350 total students. Some famous people have been given honorary fellowships from the college, which is a title to show that they have done something important for the role of women. For example, Judi Dench and Margrethe II of Denmark were given this title.

All content from Kiddle encyclopedia articles (including the article images and facts) can be freely used under Attribution-ShareAlike license, unless stated otherwise. Cite this article:
Lucy Cavendish College, Cambridge Facts for Kids. Kiddle Encyclopedia.