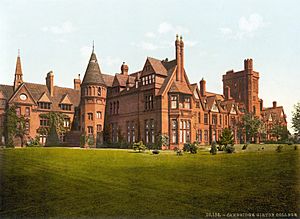 A print of Girton College from the 1890s

Girton College is one of the colleges of the University of Cambridge, England. It was built in 1869 and it was the first college for women. It was given official status only in 1948, when women were allowed in the university. In 1976, it started allowing men too. The college has about 700 students.

The college is about 2.5 miles (4 km) away from the university town. It takes the name from the village where it is found, Girton.

Some very famous people have studied at this Girton, like Queen Margrethe II of Denmark.

It has one of the biggest libraries in Cambridge.

All content from Kiddle encyclopedia articles (including the article images and facts) can be freely used under Attribution-ShareAlike license, unless stated otherwise. Cite this article:
Girton College, Cambridge Facts for Kids. Kiddle Encyclopedia.