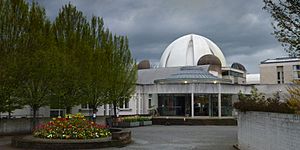 Murray Edwards College is one of the colleges of the University of Cambridge, England. It was created in 1954 with the name New Hall. In 2008, it changed its name to remember Dame Rosemary Murray, the first President of the College, and the Edwards family which gave £30 million to the college.

Murray Edwards is a college for women only. When it was built, most colleges only accepted men. Therefore, the main aim of New Hall was to increase the presence of women in the University. At the beginning, New Hall was found near Darwin College. In 1964, the new buildings were made and in 1965 the college moved to today's location, Huntingdon Road, about a mile from the city centre of Cambridge. It has about 500 students.

Murray Edwards has a very big women's art collection, the second largest in the world.

All content from Kiddle encyclopedia articles (including the article images and facts) can be freely used under Attribution-ShareAlike license, unless stated otherwise. Cite this article:
Murray Edwards College, Cambridge Facts for Kids. Kiddle Encyclopedia.