Transit of Venus facts for kids 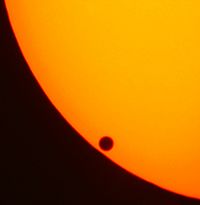 A transit of Venus across the Sun happens when the planet Venus goes between the Sun and Earth. It is a partial occultation of the Sun. When a transit happens, Venus can be seen as a small black dot going across the Sun. Transits of Venus usually take several hours.

Transits of Venus are among the rarest of predictable events which happen in astronomy. They occur in a pattern that repeats every 243 years, with pairs of transits eight years apart separated by long gaps of 121.5 years and 105.5 years.

The most recent transit of Venus happened on 5 and 6 June 2012. It was the last Venus transit this century. The one before took place on 8 June 2004. The next transits of Venus will be in December 2117 and December 2125.

The transit on 5 and 6 June 2012 was broadcast live on the Internet.

During the 18th century, astronomers tried to use transits of Venus to measure the astronomical unit, the distance from the Earth to the Sun. Many countries sent expeditions to distant lands to observe the transits from places as far apart as possible for maximum parallax.

One of the most famous expeditions was the voyage of Lieutenant James Cook in the HMS Endeavour.

All content from Kiddle encyclopedia articles (including the article images and facts) can be freely used under Attribution-ShareAlike license, unless stated otherwise. Cite this article:
Transit of Venus Facts for Kids. Kiddle Encyclopedia.