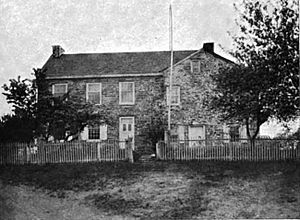 David Rittenhouse's home as it appeared c. 1919. From its lawn, in 1769, Rittenhouse observed the transit of Venus.

David Rittenhouse (April 8, 1732 – June 26, 1796) was an American astronomer, inventor, clockmaker, mathematician, surveyor, scientific instrument craftsman, and public official. Rittenhouse was a member of the American Philosophical Society and the first director of the United States Mint.

David Rittenhouse was born on April 8, 1732 in Roxborough Township, Philadelphia County, near a small village within Philadelphia called Rittenhousetown. This village is located near Germantown, along the stream Paper Mill Run, which is a tiny tributary of the Wissahickon Creek.

When his uncle, William Rittenhouse, died, David inherited his uncle's carpentry tools and instructional books. At a young age, David showed a high level of intelligence by creating a working scale model of his great-grandfather William Rittenhouse's paper mill. He built other scale models in his youth, like a working waterwheel. David never attended elementary school—he was self-taught from his family's books, and he showed great ability in science and mathematics. When David was 13 years of age, he had mastered Isaac Newton's laws of motion and gravity.

At around the age of 17, David constructed a clock with wooden gears. At the age of 19, he started a scientific instrument shop at his father's farm in what is now Valley Forge Medical Center & Hospital, located in East Norriton Township, Pennsylvania. His skill with instruments, particularly clocks, led him to construct two orreries (scale models of the solar system), the first for The College of New Jersey (now known as Princeton University), the second for the College of Philadelphia (now known as the University of Pennsylvania). David was prevailed upon to construct the second orrery by his friend, the Reverend William Smith, the first provost of the College of Philadelphia, who was upset that David would deliver such a device to a college located in the rural area of New Jersey, rather than in Philadelphia, which was seeking to be one of the important centers of the 18th century enlightenment and for the study of "natural philosophy" such as astronomy. Both of these orreries still exist, with each being held by their original recipients: one in the library of the University of Pennsylvania and the other at Peyton Hall of Princeton University. 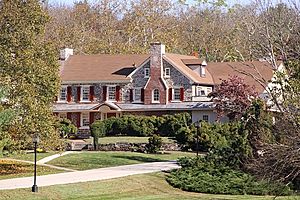 Astronomers who had been studying the planet Venus chose Rittenhouse to study the transit path of Venus in 1769 and its atmosphere. Rittenhouse was the perfect person to study the mysterious planet, as he had a personal observatory on his family farm. "His telescope, which he made himself, utilized grating intervals and spider threads on the focus of the telescope." His telescope is very similar to some modern-day telescopes. Rittenhouse served on the American Astronomical Society, and this was another factor in being chosen to study Venus. Throughout his life he had the honour to serve in many different clubs and committees.

In 1768, Rittenhouse was elected to membership in the American Philosophical Society. He served as librarian, secretary, and after Benjamin Franklin's death in 1790, he became Vice president then served as president of the society until 1796. He was elected a Fellow of the American Academy of Arts and Sciences in 1782.

Another one of his interests was the Royal Society of London of which he was a member. It was very rare for an American to be a member of this exclusive British society.

In 1786, Rittenhouse built a new Georgian-style house on the corner of 4th and Arch streets in Philadelphia, next to an octagonal observatory he had already built. At this house, he maintained a Wednesday evening salon meeting with Benjamin Franklin, Francis Hopkinson, Pierre Eugene du Simitiere and others. Thomas Jefferson wrote that he would rather attend one of these meetings "than spend a whole week in Paris."

David Rittenhouse was married twice. He married Eleanor Coulston February 20, 1766, and they had two daughters: Elizabeth (born 1767) and Ester (born 1769). Eleanor died February 23, 1771, at age 35 from complications during the birth of their third baby, who died at birth.

David married his second wife Hannah Jacobs in late 1772. They had an unnamed baby, who died at birth in late 1773. Hannah survived David by more than three years, dying in late 1799.

Notable contributions to the United States

David Rittenhouse made many breakthroughs of importance to the United States. During the first part of his career he was a surveyor for Great Britain, and later served in the Pennsylvania government. His 1763–1764 survey of the Delaware–Pennsylvania border was a 12-mile circle about the Court House in New Castle, Delaware, to define the northern border of Delaware. Rittenhouse's work was so precise and well-documented that it was incorporated without modification into Charles Mason and Jeremiah Dixon's survey of the Pennsylvania–Maryland border.

Later Rittenhouse helped establish the boundaries of several other states and commonwealths both before and after the Independence, including the boundaries between New Jersey, New York and Pennsylvania. In 1763 Mason and Dixon began a survey of the Pennsylvania–Maryland border, but this work was interrupted in 1767. In 1784 Rittenhouse and Andrew Ellicott completed this survey of the Mason–Dixon line to the southwest corner of Pennsylvania. When Rittenhouse's work as a surveyor ended, he resumed his scientific interests. 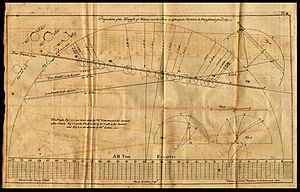 Diagram from David Rittenhouse's observations of the 1769 transit of Venus

In 1768, the same year that he became a member of the American Philosophical Society, Rittenhouse announced plans to observe a pending transit of Venus across the Sun from several locations. The American Philosophical Society persuaded the legislature to grant £100 towards the purchase of new telescopes, and members volunteered to man half of the 22 telescope stations when the event arrived.

The transit of Venus occurred on 3 June 1769. Rittenhouse's great excitement at observing the infrequently occurring transit of Venus (for which he had prepared for a year) resulted in his fainting during the observation. In addition to the work involved in the preparations, he had also been ill the week before the transit. Lying on his back beneath the telescope, trained at the afternoon sun, he regained consciousness after a few minutes and continued his observations. His account of the transit, published in the American Philosophical Society's Transactions, does not mention his fainting, though it is otherwise meticulous in its record and documented.

Rittenhouse used the observations to calculate the distance from Earth to the Sun to be 93 million miles. (This is the approximate average distance between Earth and the Sun.) The published report of the transit was hailed by European scientists, and Rittenhouse would correspond with famous contemporary astronomers, such as Jérôme Lalande and Franz Xaver von Zach.

In 1770, Rittenhouse completed an advanced orrery. In recognition of the achievement, the College of New Jersey granted Rittenhouse an honorary degree. The college then acquired ownership of the orrery. Rittenhouse made a new, more advanced model which remained in Philadelphia. The State of Pennsylvania paid Rittenhouse £300 as a tribute for his achievement. One of Rittenhouse's hands or helpers with the project was Henry Voigt, the clockmaker and Chief Coiner under Rittenhouse at the mint. Voigt later repaired the orrery in 1806 and was an earlier co-inventor of the first practical steamboat with John Fitch.

David Rittenhouse was treasurer of Pennsylvania from 1777 to 1789, and with these skills and the help of George Washington, he became the first director of the United States Mint. On April 2, 1792, the United States Mint opened its doors, but would not produce coins for almost four months. Rittenhouse believed that the design of a coin reflected the sophistication and culture of a country. The first coins were made from flatware that was provided by Washington himself on the morning of July 30, 1792. The coins were hand-struck by Rittenhouse, to test the new equipment, and were given to Washington as a token of appreciation for his contributions to making the United States Mint a reality. The coin design had not been approved by Congress. Coin production on a large scale did not begin until 1793. Rittenhouse resigned from the Mint on June 30, 1795, due to poor health. In 1871 Congress approved a commemorative medal in his honor.

In 1781 Rittenhouse became the first American to sight Uranus.

In 1785 Rittenhouse made perhaps the first diffraction grating using 50 hairs between two finely threaded screws, with an approximate spacing of about 100 lines per inch. This was roughly the same technique that Joseph von Fraunhofer used in 1821 for his wire diffraction grating. 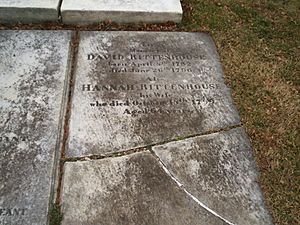 Grave of David Rittenhouse at Laurel Hill Cemetery in Philadelphia

Other notable events in Rittenhouse's life include: 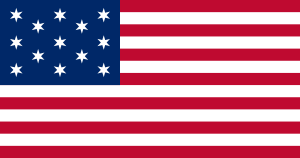 The blue field of stars in the American flag may be a tribute to the work of David Rittenhouse.

All content from Kiddle encyclopedia articles (including the article images and facts) can be freely used under Attribution-ShareAlike license, unless stated otherwise. Cite this article:
David Rittenhouse Facts for Kids. Kiddle Encyclopedia.