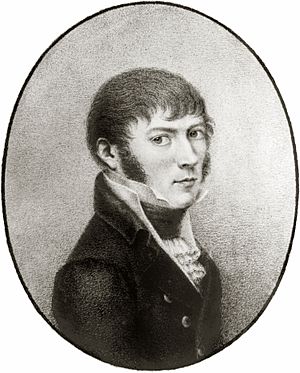 He was born in 1787 in a place called Bavaria. When he was 11 years old he had no father and no mother. Because of that, he had to work to survive. He worked making glass objects for a man called Philipp Anton Weichelsberger.

One day, in 1801, the place where Fraunhofer was working fell down and was destroyed. Fraunhofer was inside when this happened. Luckily, some people found him in the middle of the bits of the house and saved him. The prince of Bavaria was with these people and he decided to help Fraunhofer.

The prince decided to give Fraunhofer money and books to study. He studied for five years and one day he was invited to work for a man called Joseph Utzschneider. This man had a company that made glass lenses to be used in scientific instruments. And this company had a secret laboratory in a monastery called Benediktbeuern. In this laboratory people were trying to discover how to make better glass lenses. Glass lenses at that time was a very complicated technology. After three years, Fraunhofer was one of the directors of this company. And after eight years he was a partner of the owner.

Fraunhofer died very sick in 1826, probably because of the time he worked as a child.

During his time in Benediktbeuern, Fraunhofer made experiments with glass. He discovered very important things about light. One day Fraunhofer was playing with a piece of glass called a "prism" and a telescope in a room full of sun light. When he used the telescope to look at the glass he discovered that he could see all colours of the rainbow. But there were black lines between the colours. Fraunhofer never discovered what the black lines were; he suggested they might be boundaries between different colors. Many years later, scientists discovered that these black spectral lines existed because some materials that exist in the sun and in the sky can absorb parts of the light. Today scientists use a similar technique to discover what chemicals are in stars and planets. The scientists who tried to find out what was happening call this part of science "spectroscopy".

All content from Kiddle encyclopedia articles (including the article images and facts) can be freely used under Attribution-ShareAlike license, unless stated otherwise. Cite this article:
Joseph von Fraunhofer Facts for Kids. Kiddle Encyclopedia.