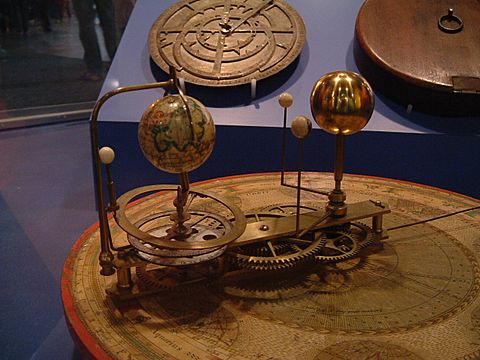 A small orrery showing earth and the inner planets

An orrery is a mechanical model of the Solar System. It shows the relative positions and motions of the planets and moons. It is usually a heliocentric model.

The Greeks had working planetaria. The first orrery that was a planetarium of the modern era was produced in 1704. One was presented to Charles Boyle, 4th Earl of Orrery – hence the name. They are usually driven by a clockwork mechanism. The globe in the centre represents the Sun, and a planet is at the end of each arm.

The first known orrery was the Antikythera mechanism, variously dated from 60 to 150 BC.

All content from Kiddle encyclopedia articles (including the article images and facts) can be freely used under Attribution-ShareAlike license, unless stated otherwise. Cite this article:
Orrery Facts for Kids. Kiddle Encyclopedia.