Joseph Wright ARA (3 September 1734 – 29 August 1797), styled Joseph Wright of Derby, was an English landscape and portrait painter. He has been acclaimed as "the first professional painter to express the spirit of the Industrial Revolution".

Wright is notable for his use of chiaroscuro effect, which emphasises the contrast of light and dark, and, for his paintings of candle-lit subjects. His paintings of the birth of science out of alchemy, often based on the meetings of the Lunar Society, a group of scientists and industrialists living in the English Midlands, are a significant record of the struggle of science against religious values in the period known as the Age of Enlightenment.

Many of Wright's paintings and drawings are owned by Derby City Council, and are on display at the Derby Museum and Art Gallery. 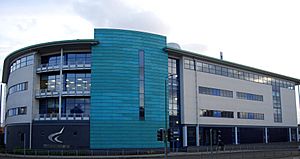 Wright's birthplace at 28 Irongate, Derby is commemorated with a representation of an orrery on the pavement nearby.

Joseph Wright was buried in the grounds of St Alkmund's Church, Derby. Controversially, the church was demolished in 1968 to make way for a major new section of the inner ring road cutting through the town centre, and now lies beneath the road. Wright's remains were removed to Nottingham Road Cemetery. In 1997, his tombstone was placed at the side of Derby Cathedral, and in 2002, it was brought inside and wall-mounted in a prominent place near the well-visited memorial to Bess of Hardwick.

Wright's name also has been given to the sixth form centre situated on Cathedral Row, Derby (not far from Iron Gate). The Joseph Wright Centre was opened in 2005 as the new flagship site for Derby College. The building is named after the eighteenth-century painter because his "artwork captured the many scientific and technological advances of the Industrial Revolution."

In early 2013 Derby City Council and Derby Civic Society announced they would erect a blue plaque on his home at 27 Queen Street in Derby.

All content from Kiddle encyclopedia articles (including the article images and facts) can be freely used under Attribution-ShareAlike license, unless stated otherwise. Cite this article:
Joseph Wright of Derby Facts for Kids. Kiddle Encyclopedia.