Province of Pennsylvania facts for kids

The Province of Pennsylvania, also known as the Pennsylvania Colony, was founded by William Penn after receiving a land grant from Charles II of England in 1681. The name Pennsylvania ("Penn's Woods") refers to William's father, Admiral Sir William Penn. The Province of Pennsylvania was one of the two major Restoration colonies. The proprietary colony's charter remained in the hands of the Penn family until they were ousted by the American Revolution, when the Commonwealth of Pennsylvania was created and became one of the original thirteen states. "The lower counties on Delaware", a separate colony within the province, broke away during the American Revolution as "the Delaware State" and was also one of the original thirteen states. The colony attracted Quakers, Germans, and Scots-Irish frontiersmen. The Lenape promoted peace with the Quakers, but wars eventually broke out after William Penn and Tamanend were no longer living. Lenape beliefs were demonized by the Quakers even though the latter had come seeking religious freedom in the first place. Philadelphia became a major port and commercial city.

Succeeding Frames of Government were produced in 1683, 1696 and 1701. The fourth Frame was also known as the Charter of Privileges and remained in effect until the American Revolution. At that time, the Provincial Assembly was deemed too moderate by the revolutionaries, who ignored the Assembly and held a convention which produced the Constitution of 1776 for the newly established commonwealth, creating a new General Assembly in the process.

William Penn (14 October 1644 – 30 July 1718) was an English real estate entrepreneur, philosopher, early Quaker and founder of the Province of Pennsylvania, the English North American colony and the future Commonwealth of Pennsylvania. He was an early advocate of democracy and religious freedom, notable for his' good relations and successful treaties with the Lenape Indians. Under his direction, the city of Philadelphia was planned and developed.

Penn, despite having the land grant from the king, embarked on an effort to purchase the lands from Native Americans. Much of the land near present-day Philadelphia was held by the Delaware (Lenni Lenape) who would expect payment in exchange for a quitclaim to vacate the territory. Penn and his representatives (Proprietors) negotiated a series of treaties with the Delaware and other tribes that had an interest in the land in his royal grant.

The initial treaties were conducted between 1682 and 1684 for tracts between New Jersey and the former Swedish / Dutch colonies in present-day Delaware. The province was thus divided first into three counties, plus the three "lower counties on Delaware Bay". The easternmost, Bucks County, Philadelphia County and Chester County, the westernmost.

"The lower counties on Delaware," a separate colony within the province, constituted the same three counties that constitute the present State of Delaware: New Castle, the northernmost, Sussex, the southernmost, and Kent, which fell between New Castle and Sussex County. Their borders remain unchanged to this day.

After the war was concluded, an additional treaty was made in 1768, that abided by the limits of the Royal Proclamation of 1763. This proclamation line was not intended to be a permanent boundary between the colonists and Native American lands, but rather a temporary boundary which could be extended further west in an orderly manner but only by the royal government and not private individuals such as the Proprietors. This effectively altered the original royal land grant to Penn. The next acquisitions by Pennsylvania were to take place as an independent commonwealth or state and no longer as a colony. The Assembly establish additional counties from the land prior to the War for American Independence. These counties were Bedford (1771), Northumberland (1772) and Westmoreland (1773).

William Penn and his fellow Quakers heavily imprinted their religious beliefs and values on the early Pennsylvanian government. The Charter of Privileges extended religious freedom to all monotheists and government was initially open to all Christians. Until the French and Indian War Pennsylvania had no military, few taxes and no public debt. It also encouraged the rapid growth of Philadelphia into America's most important city and of the Pennsylvania Dutch Country hinterlands, where German (or "Deutsch") religions and political refugees prospered on the fertile soil and spirit of cultural creativeness. Among the first groups were the Mennonites, who founded Germantown in 1683; and the Amish, who established the Northkill Amish Settlement in 1740. 1751 was an auspicious year for the colony. Pennsylvania Hospital, the first hospital in the British American colonies, and The Academy and College of Philadelphia, the predecessor to the private University of Pennsylvania, both opened. Benjamin Franklin founded both of these institutions along with Philadelphia's Union Fire Company fifteen years earlier in 1736. Likewise in 1751, the Pennsylvania State House ordered a new bell which would become known as the Liberty Bell for the new bell tower being built in the Pennsylvania State House in Philadelphia. 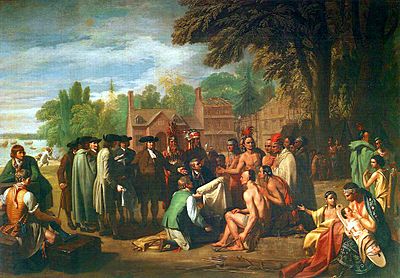 William Penn had mandated fair dealings with Native Americans. This led to significantly better relations with the local Native tribes (mainly the Lenape and Susquehanna) than most other colonies had. The Quakers had previously treated Indians with respect, bought land from them voluntarily, and had even representation of Indians and Whites on juries. According to Voltaire, the Shackamaxon Treaty was "the only treaty between Indians and Christians that was never sworn to and that was never broken." The Quakers also refused to provide any assistance to New England's Indian wars.

In 1737, the Colony exchanged a great deal of its political goodwill with the native Lenape for more land. The colonial administrators claimed that they had a deed dating to the 1680s in which the Lenape-Delaware had promised to sell a portion of land beginning between the junction of the Delaware River and Lehigh River (present Easton, Pennsylvania) "as far west as a man could walk in a day and a half." This purchase has become known as the Walking Purchase. Although the document was most likely a forgery, the Lenape did not realize that. Provincial Secretary James Logan set in motion a plan that would grab as much land as they could possibly get and hired the three fastest runners in the colony to run out the purchase on a trail which had been cleared by other members of the colony beforehand. The pace was so intense that only one runner actually completed the "walk," covering an astonishing 70 miles (110 km). This netted the Penns 1,200,000 acres (4,900 km2) of land in what is now northeastern Pennsylvania, an area roughly equivalent to the size of the state of Rhode Island in the purchase. The area of the purchase covers all or part of what are now Pike, Monroe, Carbon, Schuylkill, Northampton, Lehigh and Bucks counties. The Lenape tribe fought for the next 19 years to have the treaty annulled but to no avail. The Lenape-Delaware were forced into the Shamokin and Wyoming Valleys, which were already overcrowded with other displaced tribes.

As the colony grew, colonists and British military forces came into confrontation with Natives in the Western half of the state. Britain fought for control of the neighboring Ohio Country with France during the French and Indian War, and following the British victory the territory was formally ceded to them in 1763 and became part of the British Empire.

With the war just over and Pontiac's War beginning, the Royal Proclamation of 1763 banned colonization beyond the Appalachian Mountains in an effort to prevent settlers settling lands which the Native Americans considered their own. This proclamation affected Pennsylvanians and Virginians the most, as they had been racing towards the lands surrounding Fort Pitt (modern-day Pittsburgh, Pennsylvania).

The Supreme Court of Pennsylvania, consisting of the Chief Justice and at least one other judge, was founded by statute in 1722 (although dating back to 1684 as the Provincial Court) and sat in Philadelphia twice a year.

All content from Kiddle encyclopedia articles (including the article images and facts) can be freely used under Attribution-ShareAlike license, unless stated otherwise. Cite this article:
Province of Pennsylvania Facts for Kids. Kiddle Encyclopedia.